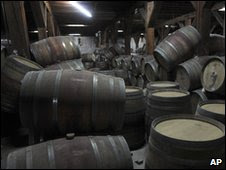 Despite the devastation it caused, last Saturday's Chilean earthquake won't have a serious long-term impact on the economy, and it might even boost growth this year by fueling a boom in the construction industry.

Analysts and the government say first half gross domestic product (GDP) will undoubtedly suffer, as those regions worst hit by the quake grapple with energy supply failures and temporary transport problems.

But after that, the economy should bounce back rapidly.

"Then we're likely to see a very quick rebound as things normalize and as the reconstruction effort gives an extra kick to GDP."

Investment bank JP Morgan even went so far as to upgrade its growth forecasts for Chile in response to the earthquake.

It said the construction boom would push annual expansion this year and next to 5.5%, an improvement on its previous forecast of 5.0%.

The all-important copper industry, which accounts for half of Chile's export revenue, was largely unaffected by the 8.8 magnitude quake as most of the big mines are in the north of the country, 1,500 kilometres from the epicentre.

Even the world's biggest copper company Codelco, which owns El Teniente, the mine closest to the devastation, said it would suffer only a 0.5% drop in annual production as a result.
The two worst affected regions were Bio Bio and Maule, which between them account for 14% of Chilean GDP.

Bio Bio lies at the heart of the local forestry industry while neighbouring Maule is home to some of Chile's finest vineyards. Those two sectors have been hard hit and will take months to recover.

The forestry industry's greatest asset - trees - were shaken but not destroyed, but the pulp and saw mills that employee thousands of people in Bio Bio were damaged.

Chile produces 7% of the world's wood pulp, and forestry accounts for 8% of national exports. Output will be curbed, at least in the short term.

For the wine industry, the quake could hardly have struck at a more poignant time.

Just this weekend, the Colchagua Valley, the most famous wine valley in the country, was due to celebrate its annual grape harvest. Instead, the local vintners are clearing up the mess.

Millions of bottles were smashed on the floors of Chile's wine cellars. Cracked oak barrels and broken storage tanks stand as testament to the power of the quake, which destroyed around 12.5% of this year's national wine production at a cost of $250 million (£165m).

Leonardo Suarez, chief economist at local brokerage LarrainVial, said he was cutting his forecast for Chilean GDP growth this year from 5.4% to 5.0% because of the earthquake.

"But I expect the economy to bounce back strongly next year as the reconstruction gathers pace," he said.

Chile has a solid macro-economic basis on which to rebuild its economy.

Unlike most Latin American countries it is a net creditor, and has billions of dollars stashed away in sovereign funds - a happy consequence of the high price of copper in recent years.

"Unlike during other tragedies that have befallen us in our history, this time the Chilean people - the Chilean state - has its own resources," Finance Minister Andres Velasco said on Friday.

Inflation will spike in the short term as fuel prices climb and Chile's farmers struggle to get their goods to market along roads ripped apart by the quake.

Already in Santiago this week, supplies of fruit and vegetables have dwindled and prices have risen.

But history suggests Chile can rebuild. It suffered major earthquakes in 1960 and 1985, and on both occasions it recovered to become one of the most successful economies in the region.

"Let's not forget, Chile is undoubtedly poorer than it was last Friday," Alberto Ramos said.
"A lot of the country's capital stock, that was built up over 10 or 20 years, has been totally destroyed."

"We're talking about higher growth rates but we should also be realistic. It will take time to replace what nature has taken away."