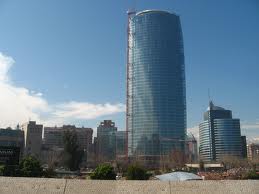 In July 2010, I stepped out into the bright winter sun onto the roof top helicopter pad at the newly built USD$150M W Hotel mixed use development in Santiago, Chile. I could see the glimmering mirrored windows of the surrounding corporate office towers. The elaborate modern designs of these tall buildings are a reminder that in last few decades Santiago has emerged as one of Latin America’s wealthiest and most highly developed cities. There is still, however, quite a big gap between the city’s rich and poor. Even on a such a clear day, the jumble of single- and multi-story cement slums on Santiago’s southern fringe was clouded from view by low-lying smog. I looked out at the massive expanse of snow capped 3,000 meter peaks that cordon in the city’s wealthier neighborhoods to the north and peered down at bustiling streets in the W’s El Golf neighborhood, Santiago’s financial district. “Look, down, here you can see the golf course,” Frederique, the young, elegantly dressed French-extracted executive who gave me a tour of the development in late July, 2010, said, peering over the edge of the cement landing pad, looking down at the brown grass 31 stories below. “Over here you can see the Entel tower,” she said, raising her hand confidently, pointing south at the concrete communications tower that looks like a some kind of giant abandoned microphone standing alone amongst the lower lying, grime-covered walls of the neglected buildings in the city’s historic center.

A few days later, I went to visit David, a Santiago-raised architect who runs a well-known English language architecture blog, at his office in Providencia, a wealthy neighborhood that sits in the shadow of the W hotel and the cement skeleton of the Costanera Center, a 300 meter tall tower being built by Cencosud S.A. that will soon be Latin America’s largest building.

He invited me into his fifth floor office. I sat down at a sofa in the conference room that was filled with a team of hipsters in their twenties who were working together on a presentation. David had his brand-new Macbook and iPhone on the table. He pulled a kerosene powered heater up to the doorway. It gets cold in the winter, but most buildings in Santiago don’t have central heating.

David reached across the table and tapped a copy of Chile’s El Mercurio newspaper, pointing at a graphic in a recent article that shows income distribution in Santiago. He explained that most of new investment in Santiago is concentrated in the elite enclaves of the “barrios altos” on the northern fringe of the city. Most of the graphic from the article was a sea of orange and red, indications of lower income neighborhoods. Only the upper right fringe of the city was marked blue for high income. Looking down at the page, I saw a comment from Luis Valenzuela, a distinguished Chilean architect and urban planning expert, who was quoted as saying, “from a cultural perspective, we are producing segregation [in Santiago].”

Home to a private army of BMW and Mercedes owners and an impressive array of successful, globally-integrated companies, Chile is widely regarded as being the economic miracle of Latin America. Between 1988 and 2008 the country’s economy doubled and then tripled in size, increasing by almost 600% in two decades. The country’s economy grew by 5.2% in 2010. Fast growth helped cut down on the number of people living in absolute poverty, but Chile still has one of the world’s least equitable distributions of wealth. To be sure, the streets in Santiago are choked with late model cars, and the flashy white buses and smooth subway cars that are part of city’s multi-billion dollar public transportation system are usually filled with sharply dressed young professionals and troupes of uniform wearing school children. But, despite the emergence of a growing middle class, Chile remains a highly stratified society.

When I walked through the El Golf neighborhood, I peeked in the windows at the Brooks Brothers and Mercedes dealership and the brightly lighted Northface store that is housed at the end of a glass walkway on the first floor of the W Hotel tower. At the Northface store, Gore-Tex ski jackets were being sold for US$550 and trucker style hats sold for US$57. According to official government calculations, more than one out of every ten of Santiago’s residents has a family income of less than $4,000 per year. Obviously, it’s an elite group of families who can afford to outfit themselves with skis and equipment and venture out into the resorts perched in the snowy peaks around the city.

Walking back to the subway I passed a chubby man in his early thirties selling Northface and Burton trucker style hats on the sidewalk. “The brands are real, but I make the hats myself,” he said with a laugh, explaining why he only charged US$6 for each hat.

The major hotels in Santiago all organize bus, van, and helicopter shuttles for tourists and locals who want to visit any of the ski resorts that overlook the city. Keen to find my own way up into the mountains, I ventured into the city center, walking through the bustling sidewalks, underneath the dirty walls of the fading 19th century buildings, past the garish billboards, and brightly lighted storefront windows, and made my way to the public bus terminal. The bus station, like the neighborhood around it, is full of small stores that sell everything from new flatscreen TVs to cheap Chinese underwear. You can also see big box stores from Chilean companies like S.A.C.I. Falabella. The shuttle buses that ferry travelers between Santiago and Mendoza, Argentina, on the other side of the Andes, are happy to drop passengers off at Portillo, South America’s most prestigious ski resort, an isolated luxury outpost that sits nestled on the Argentine border, two hours from the city center.

I gave the bus company employee who helped load my gear into the bus a $2000 peso tip (US$4), enough to purchase 24 pounds of apples from one of the farms that that dot the poverty stricken hills outside of Santiago, but not enough to buy one of the massive Angus beef and guacamole sandwiches seen in the glossy Burger King advertisements that are plastered all over the city.

Some of the buses that carry low income tourists and Argentine guest workers into Chile from the other side of the border stopped to let passengers out in the snow. Families gathered together to slide on the slippery slopes, using their cell phones and digital cameras to snap pictures of each other playing in the snow.

Having already made our reservation over the phone, my friends and I walked past the massive, sleeping St. Bernard laying outside the wood doors of the sixty year old yellow cement and stone building, into the carpeted lobby to the reception area. One of the team of receptionists was midway through explaining to a wealthy looking man in his early forties that the only rooms still available cost US$600 per person, per night. “That’s fine, that’s fine,” the man snapped impatiently in English. Inside, members of Chile’s business class lounged in the restaurant and took dips in the outdoor hot tub. Chilean companies like Empresas CMPC and Colbun S.A. export billions of dollars worth of products every year, and there’s a growing segment of the population that can afford winter ski-vacations.

In 2011, Chile’s economy is expected to grow by as much as 6.6%. As the U.S. economy continues to sputter and investor interest in Chile grows, a record number of Chilean companies are expected to launch initial public offerings (IPOs). The recent success of a number of listings confirms robust demand for new investment opportunities. So far this year, four companies have already listed shares on the Santiago Stock Exchange. In 2010, by contrast only one company, farmed-salmon producer Compania Pesquera Camanchaca SA, launched an IPO.

At a recent event in New York, Chile’s President, Sebastián Piñera, said that the Chilean economy is experiencing a “rebirth” and that if growth continues at the same rate in 2011, it will be the second-fastest growing economy in Latin America. By the end of Mr. Piñera’s term in 2014, Chile’s economy is expected to create over 1 million new jobs.

Chilean companies like Vinas Concha y Toro are building a growing presence across the globe. As the revenues continue to pour in from copper, fruit, and wine exports, and new businesses flourish, construction will continue in Santiago. As incomes rise, inequality will fall. New stores will open in the city center, and new corporate offices will be built in the financial district. In any case, Chile is likely to continue to shine brightly as the star of Latin America.

As the country’s economy continues to climb upwards, more and more Chileans will get the chance to ski down the impressive alpine slopes that ring Santiago.