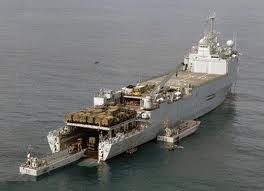 Australian defence minister Stephen Smith is to use an official visit to Europe to pursue the lease of RFA Largs Bay to the Royal Australian Navy.

Smith is in Brussels for a NATO/ISAF meeting of defence ministers, but will also visit London before returning to Australia on 10 March.

Smith has recently faced criticism because none of Australia's three amphibious transport ships were said to have been available during the recent Cyclone Yasi.

HMAS Manoora is to be taken out of service, HMAS Kanimbla is undergoing a refit until mid-2012 and HMAS Tobruk was said to be in a poor state of repair.

The Royal Australian Navy's replacements, two Canberra class ships, are not expected to be commissioned until 2014.

Australia is said to be in competition with Brazil, Chile and India for Largs Bay, which is due to go out of service in April following last year's Strategic Defence and Security Review.

Bidding is due to close on 17 March, with results announced in mid-April.

Smith had already expressed an interest in the ship during an official visit to Australia by Defence Secretary Liam Fox in January.

Smith will also discuss greater UK/Australia defence and security cooperation during the visit.