Crystal Lagoons, the developer of world's first crystalline lagoon based in Chile, is set to present its revolutionary sustainable cooling technology at the upcoming World Future Energy Summit (WFES) in Abu Dhabi.

Joaquin Konow, development manager of Crystal Lagoons, said,"This technology for cooling industrial and thermal plants, eliminates marine pollution from cooling-dependent industries, something critical for Gulf that today is under pressure from industrialization, and has put in risk its extensive coral reefs, pearl oysters and marine ecosystems."

"Today, our projects go beyond just power plants, since the cooling problem transcends to other industries such as thermo-solar plants, foundries and data centers," he remarked. 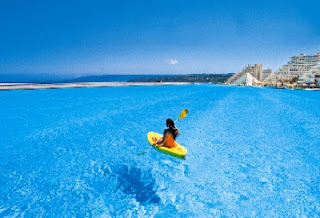 Shortly after this unique industrial application was presented at Apec, Babson College, Power-Gen and in the biggest mining fair in Latin America, Exponor 2011, several national and international business leaders from the energy sector expressed interest.

To date, Crystal Lagoons Corp has 19 projects in development in countries such as Peru, Finland, India, U.S. and Saudi Arabia, as well as in Chile, said Konow.

According to him, majority of thermal generation processes use huge volumes of seawater for cooling, captured from the ocean and later returned at a considerably higher temperature.

"The process has created a major environmental problem destroying marine life during the water suction process and causing severe disruption to the ecosystem when it returns hot water to the sea," he stated.

As a result, the US has now banned the process due to the enormous damage it causes to the environment, and many other countries are following suit.

In addition, during the process, valuable energy is dispersed into the environment, thus contributing to global warming, climate change and severely damaging the biosphere.

Today, wasted energy in the world amounts to a full 80 per cent of the electric energy actually consumed on the planet.

"The sustainable cooling technology developed by us solves this problem, allowing the creation of large crystalline lagoons which dissipate the heat through a closed cooling circuit for electricity generation plants," Konow said.

"This process takes crystalline water of the highest quality from the sustainable crystalline lagoon to cool the industrial process."

"The water is later returned to the lagoon that acts as a heat sink and in parallel as a reservoir of energy. In this way, cogeneration is allowed since the previously wasted energy is used for convenient purposes and it also makes possible to enter the Carbon Credits market," he explained.

"As this is a closed system with high quality water, the lagoon increases its temperature up to a steady state, creating a reserve of thermal energy which can then be used in a number of processes such as heating, residential and industrial hot water, thermal desalination, greenhouse heating,” he emphasized

According to Konow, this is a huge impact for the UAE where around 1,000 power stations operate under this system, using more than 168 billion liters of water a day - over five times the volume of water used for irrigation in Australia.

"Moreover, the environmental impact of diverse industries could be reduced and energy production doubled without the need for building more power stations," he added.-TradeArabia News Service