The New York Times: At the End of the Earth, Seeking Clues to the Universe 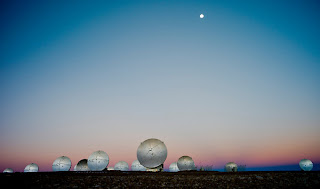 LLANO DE CHAJNANTOR, Chile — Trucks stall on the road to this plateau 16,597 feet up in the Atacama Desert, where scientists are installing one of the world’s largest ground-based astronomical projects. Heads ache. Noses bleed. Dizziness overcomes the researchers toiling in the shadow of the Licancabur volcano.

“Then there’s what we call ‘jelly legs,’ ” said Diego García-Appadoo, a Spanish astronomer studying galaxy formation. “You feel shattered, as if you ran a marathon.”

Still, the same conditions that make the Atacama, Earth’s driest desert, so inhospitable make it beguiling for astronomy. In northern Chile, it is far from big cities, with little light pollution. Its arid climate prevents radio signals from being absorbed by water droplets. The altitude, as high as the Himalaya base camps for climbers preparing to scale Mount Everest, places astronomers closer to the heavens.

Opened last October, the Atacama Large Millimeter/submillimeter Array, known as ALMA, will have spread 66 radio antennas near the spine of the Andes by the time it is completed next year. Drawing more than $1 billion in funding mainly from the United States, European countries and Japan, ALMA will help the oxygen-deprived scientists flocking to this region to study the origins of the universe.

The project also strengthens Chile’s position in the vanguard of astronomy. Observatories are already scattered throughout the Atacama, including the Cerro Paranal Observatory, where scientists discovered in 2010 the largest star observed to date, and the Cerro Tololo Inter-American Observatory, which was founded in 1961 and endured Chile’s tumult of revolution and counterrevolution in the 1970s.

But ALMA opens a new stage for astronomy in Chile, which is favored by international research organizations for the stability of its economy and legal system. Like other radio telescopes, ALMA does not detect optical light but radio waves, allowing researchers to study parts of the universe that are dark, like the clouds of cold gas from which stars are formed.

With ALMA, astronomers hope to see where the first galaxies were formed, and perhaps even detect solar systems with the conditions to support life, like water-bearing planets. But the scientists here express caution about their chances of finding life elsewhere in the universe, explaining that such definitive proof is likely to remain elusive.

“We won’t be able to see life, but perhaps signatures of life,” said Thijs de Graauw, a Dutch astronomer who is ALMA’s director.

Still, scientists believe ALMA will make transformational leaps possible in the understanding of the universe, enabling a hunt for so-called cold gas tracers, the ashes of exploded stars from a time about a few hundred million years after the Big Bang that astronomers call “cosmic dawn.”

ALMA’s construction, said Jesús Mosterín, a prominent Spanish philosopher who writes about the frontier between science and philosophy, and who visited the observatory last year, is taking place at “the only time in history that windows into the universe are being thrown wide open.”

Chile is not the only country luring big investments in astronomical projects. South Africa and Australia are competing to host an even bigger radio telescope, the Square Kilometer Array, which would be fully operational by 2024. China has begun building its own large radio telescope in a craterlike setting in the southern province of Guizhou.

At the same time, the financial crisis in rich industrialized countries has raised concerns that funding for some ambitious astronomy projects could face constraints. In the United States, a Congressional panel last year proposed killing NASA’s James Webb Space Telescope before a compromise spending plan saved the project.

“It would be very sad for humankind if we were so spiritually decadent to forgo the pleasures of consciousness and of knowledge,” said Mr. Mosterín, reflecting on the funding choices political leaders need to make. “These things make human beings a very interesting animal indeed.”

ALMA’s Operations Support Facility, an outpost built for the scientists here in the Atacama, offers a glimpse into the lengths to which people go for astronomical discoveries. From Chajnantor, where dust devils dance across the plain, and unusually extreme weather in recent months has included rains and sand storms, a dirt road runs to the facility past towering cactuses and herds of wild donkeys and vicuñas.

The facility, at an altitude of about 9,500 feet, houses about 500 researchers and other staff in shipping containers turned living quarters. In a system similar to that on offshore oil platforms, scientists have daily shifts lasting up to 12 hours for 8 days straight. Many toil through the night.

“Quiet Zone,” reads one sign in an area of containers for ALMA’s so-called day sleepers.

Supervisors enforce other rules, ensuring a work environment almost as austere as the surrounding Mars-esque landscape. Alcohol is prohibited, and those found drinking after trips into San Pedro de Atacama, a town about 30 minutes away by car, must dry out at a security checkpoint before entering the futuristic complex.

In the control room, where astronomers spend hours peering into screens displaying the array of antennas, some gallows humor prevails. “We are well in the control room, the 17,” reads one message scribbled on a piece of roofing and posted on the wall after fire alarms went off by accident at the facility in 2011, sealing those inside the control room until they broke a door to escape.

The note riffs on the 2010 mine accident and subsequent rescue of 33 miners in the Chilean desert, during which the trapped men sent a note to the surface saying, “We are well in the shelter, the 33.”

Developments elsewhere in Chile occasionally raise eyebrows here, like antigovernment protests that have rocked remote regions of the country this year and spread in March to the nearby mining city of Calama. “The protests are not directly a concern,” said Mr. de Graauw, ALMA’s director. “They are part of a democratic process, not a revolution.”

Still, it seems at times that the astronomers stationed here are as far removed from the world around them as the miners working beneath other parts of the Atacama. English predominates as the observatory’s language, tying together scientists from dozens of countries.

A sense of awe still accompanies the installation of each new antenna. Two giant German-manufactured transporters, each with 28 tires and engines equivalent to two Formula 1 racing vehicles, are used to transport the antennas. Called Otto and Lore, they look like massive mechanized centipedes making their way across the arid landscape.

“There’s a quietness that comes to you at Chajnantor,” said Lutz Stenvers, a German engineer who came here in 2008 to lead a team from General Dynamics building the antennas. “I can see why this place was chosen.”